An Afghan citizen was arrested after Friday’s attack at the busy central railway station.

The US was the largest single donor to the UN Palestinian refugee agency but is ending all funding.

A Tumultuous Week for Justin Trudeau: The Canada Letter

Prime Minister Justin Trudeau’s government was hit with a trade ultimatum from President Trump and a court ruling on a fraught pipeline issue.

Where’s That Jumpsuit From? It’s a Long Story

Amah Ayivi, a designer and clothing dealer in Paris, has spun secondhand garments into a stylish business.

The American ambassador to the Netherlands said the two were visiting the city when they were attacked. A suspect was shot and detained by the police. 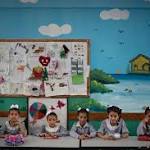